Big Tech’s push to reverse the work-from-home trend is taking it to some unexpected places. 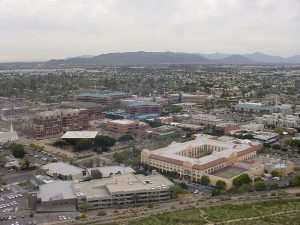 Earlier this month, Protocol reported that “within the span of three days, Google, Apple and Twitter all announced new return-to-work plans.” This news comes as Meta (Facebook’s parent company) and Amazon are increasing their office holdings. Although many of these tech titans call Silicon Valley home, it is not the sole venue for the industry’s in-person comeback. Instead, cities such as Vancouver, British Columbia and Charlotte, North Carolina have seen tech leasing activity double over the past year. The move beyond Palo Alto is due in part to tech companies trying to convince professionals to work in person again “by splurging on prime office space with great amenities,” The New York Times reports. “The industry’s search for land has been so extensive that it has surged through longtime tech hubs like Silicon Valley and into areas not traditionally known for their tech scenes.”

One of those areas is South Florida, where Amazon recently decided to expand its presence. According to The Wall Street Journal, “the e-commerce giant is renting nearly 9,000 square feet of office space at a WeWork Inc. building in Coral Gables, a city in Miami-Dade County.” Amazon’s decision to rent from the company signals Big Tech’s embrace of innovative arrangements for in-person work at this phase of the pandemic. Aside from these flexible office options, a business-friendly climate and proximity to Latin America’s white-collar workforce are also fueling the region’s rise as an industry hub. In addition to Amazon, The Wall Street Journal reports that “large tech-focused venture capital and private-equity firms like SoftBank, and Thoma Bravo have also migrated to the area.”

The Phoenix area is another location for Big Tech’s office resurgence. The online food-delivery service DoorDash and Silicon Valley-based investment company Robinhood have moved into offices in Tempe, a Phoenix suburb, since 2020. And last month, “construction workers were putting the finishing touches on a 17-story Tempe office building expected to add 550 Amazon workers to the 5,000 already in the area,” The New York Times reports. According to AZBIGMEDIA, JLL Managing Director Ryan Bartos said that “most tech tenants want the absolute nicest projects in town. This has placed metro Phoenix’s newest and best Class A office spaces in high demand.” He added, “companies who need flexibility can also lean on Phoenix’s large inventory of high-quality sublease space and spec office product.”

Aside from the pandemic’s current ebb, the reasons for Big Tech’s decision to bring in-person work back are manifold. For one, employers are becoming doubtful of their teams’ productivity while working virtually. According to a recent Insider article, some executives believe that Zoom “doesn’t spur employees to work as hard as being in the office.” Also, unlike other sectors, Big Tech can risk investing in new amenity-filled workspaces that might fail to bring in employees. The New York Times reports that since major tech companies are making staggering profits, they can “continue constructing offices without worrying about how much money they stand to lose if the buildings become obsolete.”